Issues – or What We Know, Don’t Know, and Argue About 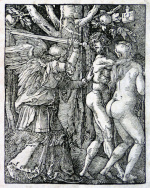 Adam and Eve’s expulsion from the Garden of Eden. Durer woodcut from The Little Passion series.

“The great environmental debates, including the debate about invasive species, revolve around the wisdom and consequences of our habits and ambitions.”

THE FIRST DELIBERATE INTRODUCTION OF AN ALIEN SPECIES INTO NORTH AMERICA was a self-introduction that changed the landscape. Homo sapiens—humankind—became a dominant life form because, as we might say, we need no introduction except our own.  As we introduced ourselves to the lands and the seas of Earth, we habitually brought other species with us and for us. Some hitch rides without our awareness. Many of the introduced species do not stay put but invade the territories occupied by long established species. Invaders make important changes in the rate and magnitude of natural variations, including in hydrology, fire regimes, species composition, and economic value.

Many people blame the Biblical command in Genesis, that man shall have dominion over all creatures, for the way in which humanity willfully or carelessly changes natural systems. However, the Biblical writers have done nothing more than recognize that humankind does what every species does. We use our powers, mental and physical, to go where we can and make the world over according to our wishes. The great environmental debates, including the debate about invasive species, revolve around the wisdom and consequences of our habits and ambitions.

We usually know with reasonable accuracy where invasive species come from, when they arrived, and how they arrived. We know their preferred habitats, and we have increasingly accurate models to predict their spread and some of their impacts. These are facts established by methodical observation—the foundation of all scientific understanding. Observation for invasive species ranges from field work and DNA analysis to searching historical documents.

Many people say we should have zero tolerance for invasive species—throw the bums out, and the more extreme activists would include Homo sapiens, the invasive that has introduced almost all the others.  In only a very few preserves and in remote areas of Antarctica, however, has humanity decided not to introduce itself. In most other places we have chosen to deal with our invasive qualities not by eradication but by management and prevention. The invasive species problem shares some of the difficult realities of water or air pollution problems. Eradication like purity is impractical. For better or worse, prevention of new invasions and management of existing ones is the best we can do.

Kudzu will not be totally eliminated in the Southeast. Himalayan blackberry is here to stay. Even the unlikely acquiescence of landscapers and homeowners will not eliminate English ivy or wisteria. In fact, any effort to completely eliminate some invasive species meets resistance from people grown accustomed to using them around their homes, eating them, or enjoying their flowers.

Our challenges are these:

Both the economics and the science of invasive species give rise to interesting questions. Below are outlines of some of these debates and links to further information where available.

Some costs of invasive species are easier to estimate than others. Money spent on herbicides and labor can be calculated easily, but deciding if these costs are necessary or part of efficient management depends on the difficult calculation of the value of most ecological goods and services provided by and affected by invasive species.

Preventing new invasions is far more cost effective than controlling established invaders, but how should new invasions be effectively prevented without putting unnecessary burdens on horticulture and agriculture? Countries and states have approached this problem in different ways. Some have created lists of regulated species that cannot be imported–blacklists (ex. CT). Others require risk assessments that new species have to pass through to gain admittance (ex. Australia and New Zealand). Some states have worked towards self-regulation by industry (ex. The Plants for a Livable DE program, in cooperation with state government, promotes within retail nurseries alternatives to invasive species).

Human vs. ‘natural’ introduction of species— Is there something inherently different about human introduction of plants compared to introduction by a bird, ocean currents, or by the wind? (David M. Lodge, Kristin Shrader-Frechette. 2003. Nonindigenous Species: Ecological Explanation, Environmental Ethics, and Public Policy
Conservation Biology 17(1): 31–37.)

Earthworms and plant invasions— Exotic earthworm species are being found in greater abundance where invasive plants occur. Are earthworms responsible for the success of some invasive plant species? (Biological Invasions 8(6), 2006.)