For those of you faced with small patches of garlic mustard, or if you have access to a lot of volunteer labor, a new study  illuminates the best times to pull or cut plants.  Plants pulled before any seeds begin to set were not able to subsequently produce viable seed.  It didn’t matter whether those plants were bagged, hung roots up, or left in a pile.  However, plants pulled after seeds began to set did produce viable seeds. 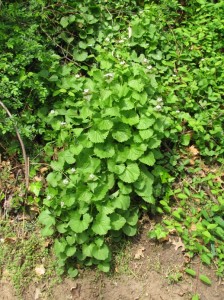 Cut or pull before seeds begin to set

Also of interest to weed warriors is that plants that were cut at bud stage, flowering, early seed set or late seed set were not able to produce shoots that flowered.  If you are concerned about soil disturbance caused when the plants are pulled (disturbed soil is the ideal spot for many invasive plant seeds to germinate), then you could cut plants instead of uprooting them.

This site uses Akismet to reduce spam. Learn how your comment data is processed.